This is an old version of the Time Loop Layer.

The Time Loop layer can be used to repeat an animation over and over.

It has 2 parameters, Start Time and End Time. These parameters, like any other in Synfig can be animated, so that they change over time. This can be confusing, so make sure you aren't in Animate Edit Mode when working with the Time Loop layer, unless you know what you're doing!

If the Start Time is later than or the same as the End Time, then the Time Loop Layer doesn't do anything, it acts as if it wasn't there.

Otherwise, the Time Loop layer makes time stand still until Start Time, and then to repeatedly loop through the first (End Time - Start Time) seconds of its child layers.

Note - what actually happens is that for the first 5 seconds, time loops through negative times in the child layer, but since it is impossible (but see the Time Offset Parameter) to animate anything at negative time points, this should be the same as the time staying at zero. It's not clear whether this is a bug, or whether any existing animations rely on this behaviour. This is how the mapping actually works:

Specifying a huge number for the End Time parameter effectively turns the Time Loop layer into a Time Shift layer. The Start Time parameter controls the amount of the timeshift, with both positive and negative values working as expected. 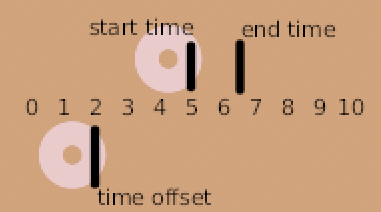 The other circle is an identical copy of the first one, with the same waypoints, but it's inside an encapsulation layer with a Time Offset of 2s.

The "Time Offset" encapsulation layer is Time Looped, with a Start Time of 5s and an End Time of 6.5s. The Time Offset makes it possible to see how the Time Loop layer sets the time to be negative before Start Time is reached.