Difference between revisions of "Doc:Ball Bounce"

This tutorial is under contrstuction. Please be patience.

This is a tutorial to explain how to create a bounce tutorial. The main target of the tutorial covers the ball movement. It is known that cartoon like balls have also a very deformed poses meanwhile thery are travelling and speciphically when it hits the ground. This could be covered in a second stage.

Different aproximations for the same result

With Synfig there are four ways to create a bounce ball using the technical posibilities of this program. 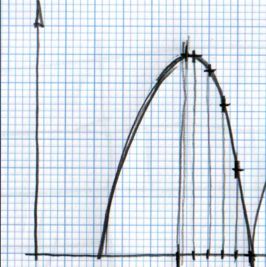 Once the points are located in a 2D grid then it can be drawn directly in Synfig doing use of the grid (F11). After draw them I normalized the values to be completely symmetrical. That gives the following table:

The resulting animation and file is this one.

The TCB interpolation mode allows modify the Tension, Continuity, Bias, and Temporal Tension values of the waypoint. So you can create easily smooth or peak aproximation to the value of the valuenode in the wypoint position.