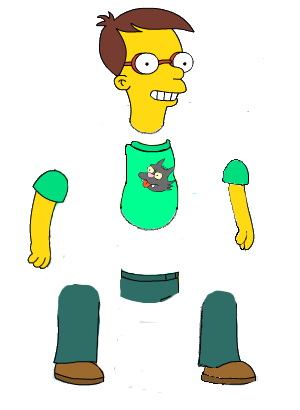 When you do the tutorial you'll notice that all the image layers have the same dimensions. The boundary of each image layer is the rectangle with the green ducks shown. The bounding boxes of all the layers coincide since I expressly created each image with those dimensions and properly placed. It will allow us to do the following: Select all the layers (CTRL + click each layer in the layer list) and go to the Top-Left and Bottom-Right parameters (they get greyed) in the parameter list. Make right-click -> Link on each one of the Top-Left, Bottom-Right parameter. It will link all the boundaries of the image layers to maintain them at the same relative position. This will prevent any accidental modification of the image edges and subsequently avoid any improper image deformation. 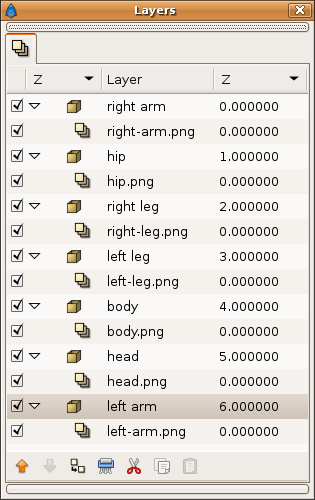 Before adding the Rotate Layers you should have analysed your character. You need to have figured out the mechanical framework which the character's movements are bound by, the mechanics of the character's skeleton. For a simple humanoid character one considers the hip as the center of the rotation of the whole skeleton. Each limb rotates relative to the hip's rotation. Also each sub-limb should rotate relative to its parent and the parent relative to the hip (we use the hip as the root bone).

In our current example, the body will rotate relative to the hip and the head relative to the body. When the character's hip is rotated there needs to be an identical rotation of the body. The head needs to rotate with the torso and additionally with the hip. This cummulative effect of rotating limbs and sub-limbs is known as the limb hierarchy. The head also needs its own individual rotation which won't affect any other limb.

Let's start by adding a Rotate Layer to the hip. Go to the hip paste canvas and select the hip image layer. Insert a new Rotate layer (File->Layer->New Layer->Transform->Rotate) just above the hip image layer. Rename the layer to 'Rotate hip'. Now go to the Rotate Layer parameters dialog and select the Amount parameter. This parameter governs the angle of rotation. Export that parameter (right click) and give a proper name (hip).

Now to set up the rotation layer. You should have noticed that there is a Origin parameter in the Rotation Layer, this is the origin of the rotation. It is very important that you set the origin to the proper position, allowing proper rotation of the image layers, so in this case you need to place the origin of rotation at the center of the character's hips. As another important example, arms will rotate about the shoulder and not about the hand.

Now consider our reasoning: When the character's hip is rotated there needs to be an identical rotation of the body. The head needs to rotate the with the torso and additionally with the hip. Another way to put this would be that each limb bares it's own rotation, plus the rotations of those limbs higher up the limb hierachy. To effect this you should add the same rotation layer to all the limbs that depend on the hip rotation. Copy and paste the Rotate hip layer to all the encapsulated image layers. Remember that the rotation parameter is exported, and so will the value shared between all the pasted rotation layers, giving our desired effect. All the limbs will now rotate in congruently with the hip. Magic! See the image.

After doing that for the legs and for the body you should obtain something like this: 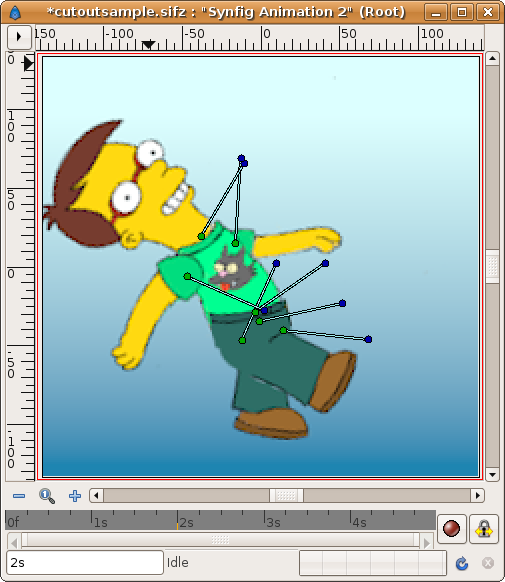