The Toolbox Panel is the main window of Synfig: even if you have several open projects, there will only be one Toolbox. The window is separated into three areas or palettes: 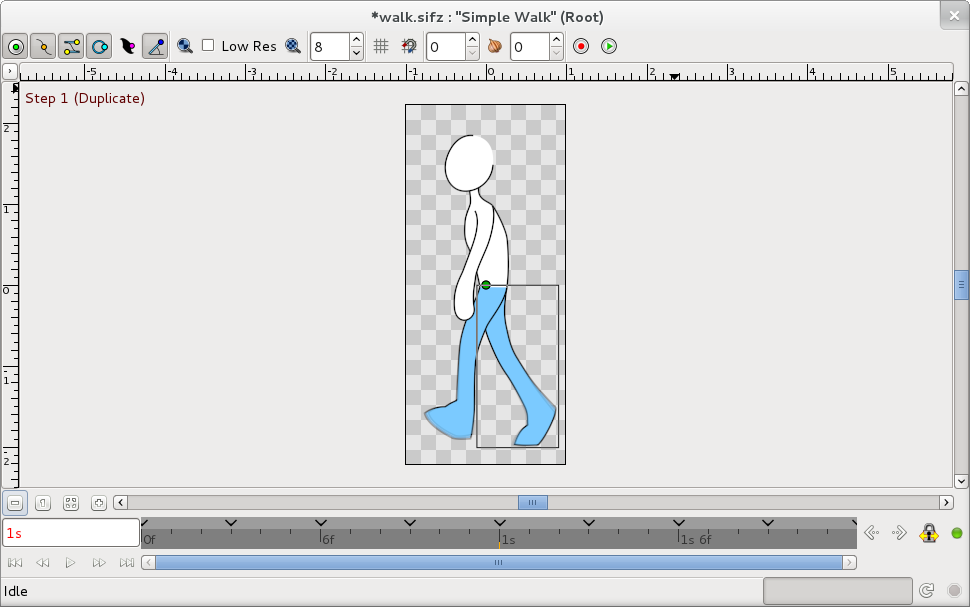 Once you have opened a file or created a new project (e.g. via the buttons in the toolbox) you'll see the canvas window. This is where you'll create your animation!

Whereas most graphics apps have a set of menus at the top of the screen, the top of the MDI window, or the top of the drawing window, Synfig has a caret: the little black triangle in the upper left corner of the canvas. Beneath are all the menus you would expect and that allow you to access most of Synfig's features.

The area with the grey check-board pattern is your working area in which you can create elements/layers and manipulate them.

The timeline that you can see in the picture here only appears when you have defined a non-zero duration in the settings dialog of your project. To the left you can see the number of the current frame and on the right side two buttons to switch the animation status and to lock/unlock the keyframes. The Bases de la Animación Tutorial gives a good introduction on how to work with this buttons.

In the picture above there are three elements on the canvas, the black curve - called Bline - is selected. The little coloured dots control the curve and are called ducks.

The third window contains again three areas, each of which can show different panels: in this picture the Navigator Panel, the Tool Options Panel and the Layers Panel are active.

You can access detailed descriptions of the other panels here.

The fourth and last window shows the Params Panel, where you can find detailed parameters and settings for the active element like colour, width, opacity, location and so on. To the right is the Time Track Panel that allows you to create and modify Waypoints.