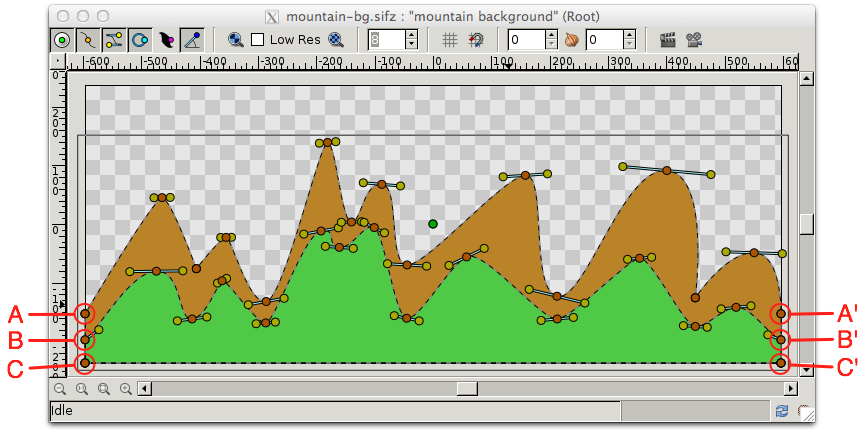 Save the file. We use the name mountain-bg.sifz.

Create a new canvas for the animation. As mentioned previously, in this tutorial we will use WA = 640, HA = 480. See section Create background for a safe way to set the dimensions of a canvas. In the Time tab of the canvas properties, set Start time = 0f, End Time = 30s.

Move the Origin of layer [bg 2] WB pixels in the same direction of the simulated camera panning. So if the camera pans towards the right, in our tutorial example the coordinates of [bg 2] Origin would be X = WB = 1200, Y = 0.

Add on top a Zoom layer with Amount = -1.5. When rendering, this layer must be disabled, but it is very useful to see the two background layers at once and validate what one is doing. 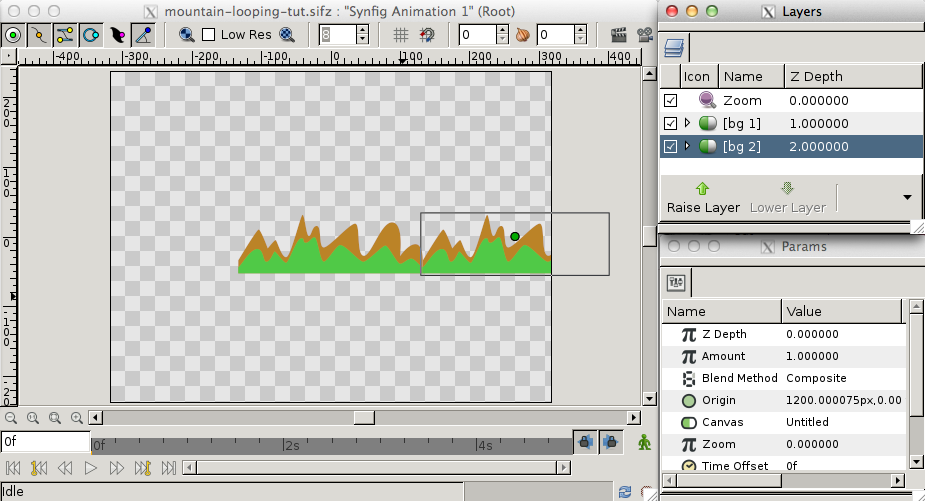 In the screenshot, you can see the [bg 2] layer selected in the layers panel, its bounding box in the main window and, in the Params panel, the coordinates on the Origin (X = 1200, Y = 0). The zoom layer is enabled.

Add a Translate layer just above the two background layers. Keep it selected. We now need to add two waypoints, on at the beginning of the loop and one at the end. Turn on animate editing mode. The loop will last T = 10 seconds. Move the animation time to 10s. Set the X coordinate of Origin to the opposite of [bg 2], in this case X = -1200 px. This will add a waypoint at time 10s.

Move the animation time to 0s. Set the X coordinate of Origin to 0. This will create another waypoint. Set its in/out interpolation to linear.

If you play the animation, the background will move for 10 seconds and then stop. We will now add a