The Group layer is a special layer that can hold other layers. It is generated via the Group command accessed via the context menu in the Layers Panel or through the Layer Menu in the Canvas Menu Caret. As well as grouping a set of layers it can also translate them, scale them, and even modify the time for the layers it contains.

The parameters of the Group layers are:

This is "Group" by default if the Group layer was created by grouping other layers, or "No Image Selected" if it was created from the New Layer Menu. This parameter lets you select another canvas.

The canvas parameter presents a drop-down menu of the exported canvases, plus an extra entry called "Other...". Selecting "Other..." presents the user with a text entry box asking for the name of the canvas to use. The name typed should have the following format (where [ ] indicates an optional part, ( ) is for grouping, and * means "0 or more times"):

In its simplest form, this is just an id, ie. the exported name of one of the child canvases of the current canvas.

This parameter allows to control thickness of all outline layers inside. Assigning positive value to this parameter makes all child outlines rendered thicker, while negative value makes them look thinner. This feature is very helpful for tuning outlines in complex artwork and it also allows to achieve some nice effects like constant outline width at any zoom level.

Note: The "Outline Grow" parameter can not be applied to exported and imported (external) Groups layers. 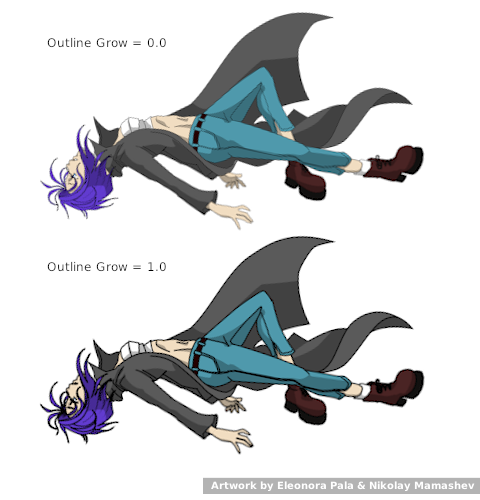