Start Synfig Studio, and create a new file. Click the 'caret' menu (between the horizontal and vertical rules, in the top left hand corner of the canvas), then "Edit" and then "Properties". A dialog called 'Properties' will appear. Give your new file a name and a description, and then click "Apply" (don't click "Save" yet -- we're not quite done with the 'Properties' dialog). Make sure to edit 'End Time'. The strange looking '0f' will change to a more familiar presentation as soon as you click it. Set this to 2 seconds. 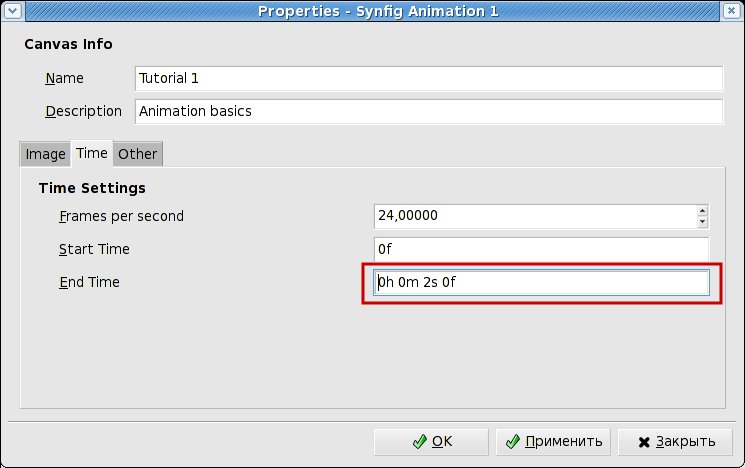 Now create a simple black rectangle that will serve as our background. It's not necessary to make it cover the whole canvas. 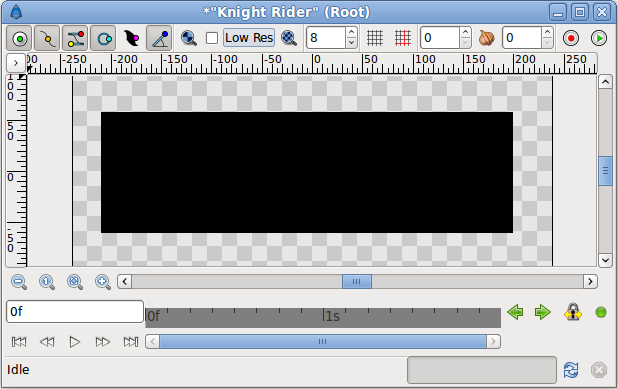 We now need a circle. Change the painting color to red, and draw a circle. It doesn't matter if it's not perfect: You can edit it. Activate the 'Normal' tool, and click the circle. It will go into a sort of editing mode which is easy to detect by the small green dot in the middle and the white rectangle around it. You can move the red circle by grapping it on its green dot in the middle. 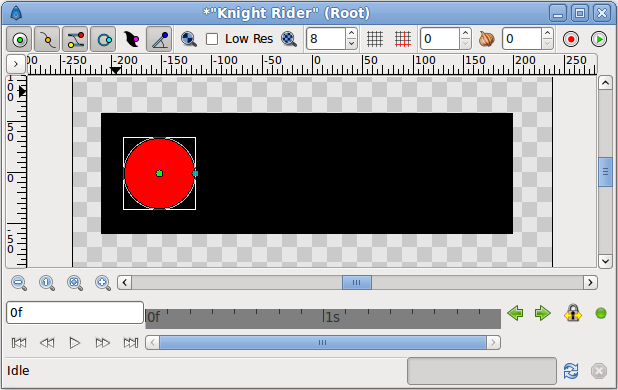 These are the first steps to draw an object and to move it, but not yet an animation, you may say. Indeed. Let's have a look how this works.

In the beginning, you entered a value of 2 seconds in the 'Properties' dialog. Due to this, your canvas window (the one where you draw) got additional capabilities. There's a grey time slider, for instance. You can click on it, and a small orange indicator will appear but nothing changes. This is because you need to switch to 'Animate Editing Mode' first by clicking the green dot just to the right of the grey time slider. You will note that your canvas gets a red outline; it reminds you that changes to your objects now affect your animation. 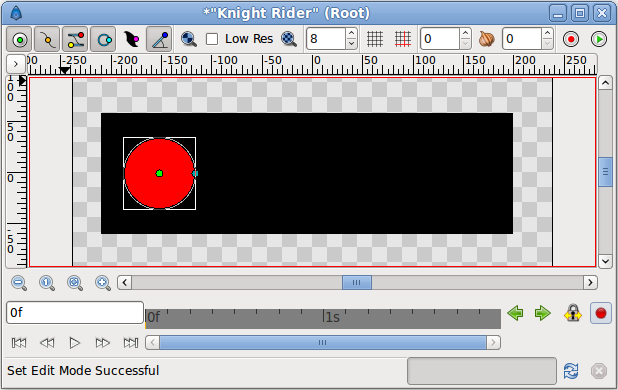 Previously, three 'steps' or 'stages' were mentioned. These are represented by so-called 'keyframes' (Just in case you're familiar with video encoding: No, that's not the same!). A keyframe is an image in time where something important happens with your objects.

Click the keyframe tab -- this is the one with the small key in the 'Params, etc.' window -- to be able to edit keyframes. Now click the small 'plus' sign and you should get a new entry in the list displaying '0f, 0f, (JMP)'. 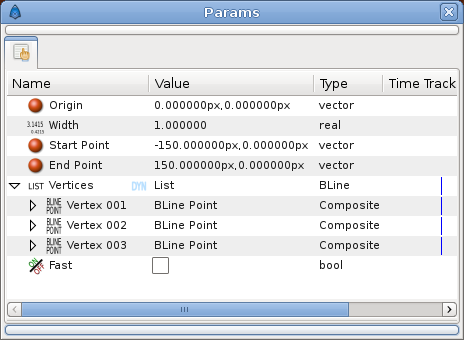 If this didn't happen, you made something not mentioned so far. Close your file and start again.

If the entry appears, go to the '1s 0f' mark in the timeslider. The small orange indicator should move there. Then add another keyframe by clicking the small plus sign. Repeat the process with the time slider indicator set to '2s of'. You should have three keyframes in the list, now.

By now, you may have figured out what those mysterious '1s 0f'-type marks represent. They indicate a specific point on the timeline, expressing a location in terms of seconds (s) and frames (f).

Each second is divided into 24 frames, much like a meter on a measuring tape is divided into 100 centimeters. The frame markings begin at zero (0) and go up to 24, whereupon a new second is entered and the framecount returns to zero.

For example, when five whole seconds and three frames have passed, using this timeline notation would be "5s 3f."

The keyframe list is rather easy to understand: It displays 'Time' which is basically the start time, 'Length' which is self-explanatory, 'Jump' which we'll cover next, and 'Description' which is, again, self-explanatory.

Now, you might be wandering about the entries called '(JMP)'? In fact, these are links just like web links: Click them, and the indicator in your timeslider will jump to the correct time.

You can use this to edit your image for a given moment in time. For instance, you can now jump to the first second, and move the red circle to the right. There! You made your first movement; your first animation with Synfig!

You wonder where the animation is? Just click to arbitray position on the timeslider: You will note that the red circle is in positions where you didn't move it to! What happen? Synfig figured out what you would like to do, namely move the circle, and draw all the images between these states. Each image will later make a frame in your animation; and the circle will appear to be moving.

Before you can see your animation, you need to process (or render) your work. There are two ways to do so; using the synfigstudio (what you have been using so far), or the command-line program synfig.

To do so, close the animate editing mode by clicking on the red dot in the timeline editing widget, and save your file; for instance under the name BasicKnightRider.sif. Then press on the > symbol in the upper left corner of the image window to open the menu, open the File menu and click on the Render item. Change the filename to BasicKnightRider.gif in the same location you saved BasicKnightRider.sif and choose "gif" target format instead of "Auto", then click Render. Depending on your processor speed it should take a few moments, but finally the image window status bar should say "File rendered successfully". The "magick++" target (if it is available) produces much better gifs than the "gif" target because it can optimise the palette for the image.

Open BasicKnightRider.gif in Firefox or another application that is able to show animated gif's. However, Firefox will replay the GIF all the time which makes your short animation a rather long one. If you're now seeing a red circle moving from the left to the right and back: Congratulations! You just made your first animation!

Note: you can also preview your animation. Press on the > symbol in the upper left corner of the image window to open the menu. There choose File->Preview.

If you would rather use the command line instead of the menu to render your animation, then open a terminal (On Windows, go Start -> Run -> type cmd<enter>), change to the directory you saved the file, and type something like

WARNING: The version you are using may not support the GIF output format at the moment, it depends on the version and compilation settings.

A few messages appear that don't matter right now. Depending on your processor speed it should take a few moments, but finally a line like

should appear, then you are done and can view your animated gif using firefox or another program as mentioned above.