The object of this tutorial is that achieve that one object points to other regardless the movement of both objects. For this tutorial I've selected one moving eye following one moving fly. This is the result you'll obtain:

Create the objects to move

Now create the Eye. To create it simply create three Circle Layers: One black in the background (contour of the eyeball), one white in the middle (white eyeball) slightly smaller than the black one, and one smaller black for the pupil. Once created place them in that order and below the fly Group Layer. Rename them properly.

Add a Solid Color Layer for the background and move it down to the bottom.

We are ready to start to make the magic ;)

It should look like this (I have a Zoom Layer added to make a close up screen shot):

First Method, "all by hand"

To make the pupil look at the fly where ever it be, we need to automatically move the pupil based on the fly movement and position. To do that we need to make some geometric work.

First let's convert the pupil's Origin to Add convert type. To do that select the 'pupil' layer and at the Parameters Panel select the Origin and do right click. At the contextual menu select Convert and in the sub menu select 'Add'. This will add three sub parameters to the Origin.

LHS is for 'Left Hand Side' and RHS is for 'Right Hand Side'. In a addition the order of the elements is not important but for a subtraction it is important.

You can see those sub parameters by clicking on the triangle that appear near the Origin on the left.

Now, we will connect the LHS sub parameter with the origin of the eye, so the position of the pupil is given by the sum of two vectors: the origin of the eye (LHS) and the vector from the eye's origin to the pupil's origin (RHS). To connect the LHS sub parameter first select the Library Panel and expand the Value Nodes list by clicking on the small triangle on the left of the 'Value Node' row. You'll see all the exported value nodes that we did on the previous section of the tutorial. Then select the Origin. This would allow us to use it as the target for the subsequent Connect actions. Go to the Parameters Panel again and do right click on the LHS sub parameter of the Origin. Select Connect from the contextual menu. It will connect the LHS parameter to the exported value node called 'origin' already selected on the Library Panel. It should look like this:

So we need to control the distance and the angle of the vector form the eye's origin to the pupil's origin (that is the RHS). To do this we will convert the RHS in a Radial composite:

Select the RHS sub parameter. Right click on it and select Convert and Radial Composite from the sub menu. It will provide two sub parameters:

Let's first handle the Radius sub parameter. The first requisite is that the pupil shouldn't go outside the white part radius so we will convert the Radius to be a 'Range' convert type. Use the same procedure: right click the Radius sub-parameter and select Convert and then Range. It will provide the following sub parameters:

Repeat the same Convert operation over the 'Max' sub parameter and convert it to a Subtract type. It should look like this:

This time the RHS and LHS has the following meaning: Max = (LHS-RHS)*Scalar. Leave the Scalar with its default value (0.0) and now let's study the two components of the subtraction. Remember that the Max value represents the maximum distance that the pupil can respect to the eye's origin. So it should be this: Max = white's radius - pupil's radius. Let's do it:

Now let's handle the Link sub parameter of the Radius sub parameter converted to Range type. The Link represents the radius that we want to limit with the range conversion. It should be the distance between the fly and the eye's origin. If the fly is inside the eye, we don't want to limit the distance, right? that's when range wouldn't modify the Link value. Let's go with it.

Now convert the Vector into a Subtract type. It will give you again three sub parameters: 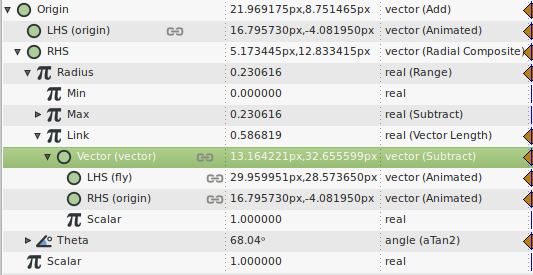 To be reused later, Export the Vector sub parameter and call it 'vector' as shown in the image.

We have finished with Radius. Now let's go ahead with Theta. Theta is the angle between the horizontal and the vector that goes from the eye's origin to the pupil's origin. We wan it to be the same angle that the fly's origin has with the eye's origin. Angles can be calculated based on vectors coordinates. So we have to first convert the angle Theta into a function that calculates the angle of a vector in function of its coordinates. It is the Convert convert type. Atan2 provides two sub parameters:

Where X and Y are the coordinates of the vector we want to obtain its angle. There are two special convert types that extract the x and y coordinates pf a given vector. They are 'Vector X' and 'Vector Y'. Let's convert the 'X' and 'Y' sub parameters into Vector X and Vector Y respectively. You'll have this:

Now Connect each 'X' and 'Y' sub parameters to the recently exported 'vector' value node, that is the vector from the eye's origin to the fly's origin. We are done!

The conversions are finished!!.

Animate the fly and the eye

How to make this work in Synfig:

Animate the fly and the eye

You can now freely move both the eye and the fly... and keep a close watch on the pest. Math are great, we have achieved the desired effect quicker ! ... isn't it ?

The vector mathematics beyond 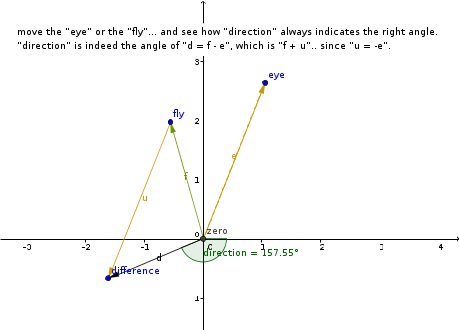